The city of Strasbourg (France) is the official seat of the European Parliament. Ever since its completion in December 1999, the main tower structure, called the “Louise Weiss” building has raised eyebrows and questions. Its promoters describe its peculiar appearance as reflective of the “unfinished nature of Europe.” It was intentionally designed to look like the Pieter Brueghel 1563 painting entitled “The Tower of Babel.” The ancient tower which theologians recognize as the unfinished work of Nimrod, who was building a tower to defy God, is an interesting source of inspiration for a modern democratic institution.

The professed intention of Strasbourg building’s lead designer was that the EU Parliament would complete the original goals of these ancient peoples. I challenge those history buffs among you to research the proposed official poster promoting the Parliament Building. The poster was eventually banned due to protests by numerous groups, but it clearly reveals the mindset of the builders. The poster showed the people of Europe rebuilding a replica of the tower in Pieter Brueghel’s painting. At the very top of the poster were reversed pentagrams (upside down stars.) And the poster’s slogan was: “Europe: Many Tongues One Voice,” inferring that the activity of Parliament would reverse God’s punishment for the idolatry and arrogance of the people of the world. 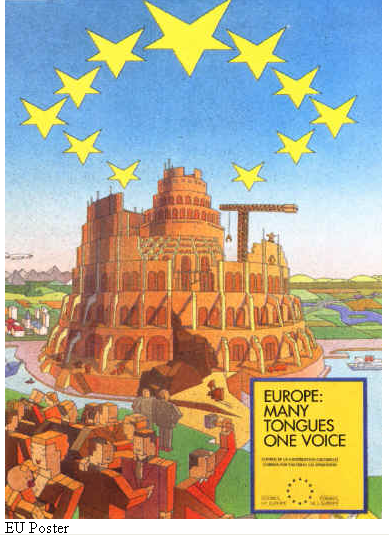 Even those of you who see this as a silly religious conspiracy theory must admit that the inspiration behind the Louise Weiss building oddly seems to align with the esoteric beliefs of the world elite and their fractured understanding of ancient scriptures. Just one more thing to think about in the light of recent world events.

No comments to show.